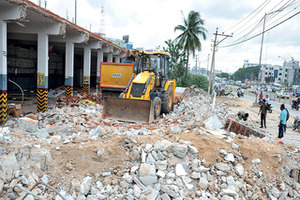 Having started work on the Whitefield stretch, Bangalore Metro Rail Corporation Limited (BMRCL) has now started initial construction activities for Metro stations coming up on Hosur Road and demolition of properties has started.

BMRCL is building a new line under Phase II from RV Road Metro Station to Electronics City. It has already acquired 219 properties along the line out of the 545 notified properties to build the Metro line with a length of 19.14 km. However, acquisition of the land required for two intersection stations at RV Road, Silk Board and an elevated Metro line at Ragigudda is yet to be finalised.
An official of BMRCL said, “After paying compensation to the property owners, BMRCL has taken possession of the land. The demolition work of the properties coming in the way of elevated corridor is under progress. For this line, the compensation of Rs 601 crore has been paid to the owners. BMRCL is spending total of Rs 1,200 crore to acquire the properties and, for 388 properties, compensation of Rs 1185 crore has been fixed. The price of the property ranges from Rs 8,000 per square feet to Rs 12,000 per square feet depending the location.”
The official said that properties for a few stations will be finalised in coming days. “We had earlier identified land required for Silk Board Metro station, however, land requirement was changed due to a change in the plan of Metro station which will be an intersection station of RV Road – Bommasandra line and KR Puram – Silk Board line. Even at the RV Road station, once the hurdles are cleared, required land will be finalised.” The line will have one more intersection at Jayadeva Hospital as it also connects Gottigere – Nagawara line, another new line under the Phase II.
MD of BMRCL, Pradeep Singh Kharola, said, “In addition to demolition of the properties on Hosur Road line, the initial works of the stations have also commenced at locations near NICE Road and other areas. Contractors have put up barricades around the construction sites. In a couple of the months, the tender process of road cum Metro rail flyover between Ragigudda and Silk Board will be completed.”
The BMRCL has already reached an agreement with National Highway Authority of India on building an elevated corridor on the service road of Hosur Road.
The project is very crucial as Metro will be now link Electronic City, an area that sees some of the worst traffic in the city, especially at Silk Board.
BMRCL claims that it will complete the project in three years but, going by their previous record, the promise is hard to buy.
CEO of Electronic City Industrial Township Authority (ELCITA), Rama NS, said, “The authorities have to take a lot of measures to ease traffic movement during construction work. First, they should start with widening the road where Metro corridors are going to be built. Next comes good traffic diversion wherever necessary. At Silk Board, authorities have to plan everything possible to avoid any traffic clogging. There is a need to promote public transport as well.”