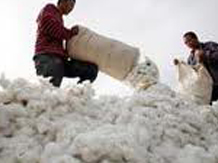 The registration for cotton yarn exports has jumped 55 per cent in the first four months of the current financial year due to a resurgence in Chinese demand. If the trend continues, cotton yarn export will likely hit a new record this year.

Data compiled by the Directorate General of Foreign Trade showed traders and exporters had registered for a shipment of 488.15 million kg between April and July 2013, compared with 314.19 million kg in the corresponding period last year. Export registration for cotton yarn almost doubled from 245.84 million kg in the April-July 2011 period.

According to reports, the Cotton Yarn Advisory Board has projected a marginal 14.2 per cent increase to 1,150 million kg in cotton yarn exports from India this financial year. But actual exports could be even higher. Total cotton yarn production this year is estimated at 4,000 million kg.

“The substantial increase in exports, however, has not affected domestic supply to mills at all. Domestic mills are operating smoothly with adequate capacity,” said Nair.

The exponential growth in cotton yarn shipment has lowered the prospects of cotton exports as Chinese importers find purchase of fibre cost effective.

According to Arun Sakseria, a Mumbai-based cotton trader and exporter, the government of China has levied around 40 per cent accumulative import taxes and local levies to encourage local power loom and textile sectors. In contrast, import duty on cotton yarn works out to seven-eight per cent. Hence, importing cotton does not make sense for Chinese textile mills, he added.

China produces around 6.7-7 million tonnes (mt) of cotton annually against the country’s consumption of 9.5 mt. China has framed a policy under which the shortfall should be bridged through “zero” import, while the additional purchase from overseas would attract huge duty.

“The same policy should be adopted by India also. The government should levy high export duty on cotton yarn to discourage shipment of the textile raw material overseas. Instead, local textile mills should be encouraged by making available of surplus quantity to produce cheaper garments,” said Sakseria.

Meanwhile, the benchmark 40’s count combed cotton yarn price moved up by four-five per cent in the last one month to trade between Rs  250-255 a kg in Mumbai.

Bharat Malkan, proprietor of IB Yarn Agency, a trader and exporter of cotton yarn, said: “While demand from China, Brazil and Turkey is on full swing, enquiries have started floating in from Europe and Italy also after four years of uninterrupted halt.”

Another factor which helped exports is the record depreciation in the rupee against the dollar. Exporters have rushed to sign a pact with importers at the current exchange rate and lock in till exports are executed. Also, cotton price jumped 11.79 per cent to trade at Rs  13,329 a quintal on August 19 against Rs  11,923 a quintal a month ago.