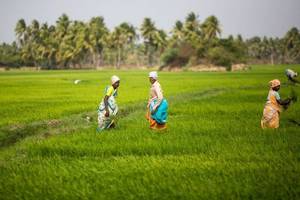 "Globally, exports in agricultural products is over USD 1,500 billion annually as per the latest data from WTO and India's share is less than USD 35 billion at present," said Crop Care Federation of India (CCFI) president Rajju Shroff. "We have urged the government to increase focus on trebling India's share in agri exports to double farmer income by 2022," Shroff, who is also MD of United Phosphorus Ltd, told reporters here.

A report, prepared by city based not-for-profit organisation Centre for Environment and Agriculture (Centegro), also emphasised the need to raise India's share in global agri exports to increase farmers' income automatically. The report was prepared in association with experts from Tata Strategic Management Group was released by Union minister Nitin Gadkari recently.
India ranks second globally in agricultural production, whereas in services and manufacturing sectors India's position stands at 11th and 12th respectively. Agriculture's contribution to India's economy extends beyond the rural economy and encompasses many activities in manufacturing and services sector.
Export surplus from the country's agricultural trade is higher than the corresponding figure achieved by the manufacturing sector, the report said.
On lines of the 'Make In India' campaign, the report urged the government to launch 'Grow In India' campaign aiming for substantial gains in agri-exports with a single authority to monitor India's international agricultural trade-both exports and imports.
The study debunked popular notions about farmers injecting hormones, colouring chemicals into fruits and vegetables improve colour and size in watermelons and pomegranate. Organic farming is not sustainable because of low yield and need for huge amount of unavailable manure. Farmers spend on crop protection chemicals is just 1 per cent of the value of total agriculture production, it said.
The health scare about pesticide residues in food is a malafide campaign propagated by foreign funded NGO's in order to tarnish Indian agriculture, the report said. "Traditionally used yield per acre for crops is an unfair measure of Indian farm productivity.
Globally, India is the largest producer of milk, second largest in fruits, vegetables & fish and third largest in egg production in the world. "This is all due to small and marginal farmers who deploy family labour and engage in intensive multi cropping all year round. They also manage livestock & poultry efficiently using agriculture waste as animal feed and to produce manure," Shroff said.