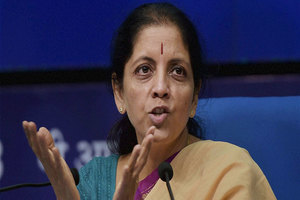 Steven Ciobo, MP for trade, tourism and Investment is in India for the second Australia-India business week. Ciobo who met Nirmala Sitharaman, Mos for Ministry of Commerce Industry yesterday is hopeful for really strong and stable investments between India and Australia.

“We are here to build on the work both the governments have done in the past. I have had a very constructive meeting with Nirmala Sitharaman today to discuss trade and investment relationships between the two countries”, Ciobo said while addressing the media at the Australian High Commission.
Ciobo has come to India with a delegation of 170 members from Australia where businessmen from various sectors have come to India to discuss the opportunities of a strengthened relationship between the two countries.
“We have got pe people to Involved in various streams around Agri businesses, innovation and health, mining, engineering and technical services. These streams are the ones where we believe Australia has the expertise,” said Ciobo.
“It is very clear that India and Australia will continue to see an evolution of their relationship which will lead to strengthening the relationship between the two countries.”
On being asked what is causing the delay in negations for an FTA between the two countries and what the talks in progress are, Ciobo very cautiously told the media that he won’t engage in any kind of a running commentary on the ongoing negotiations.
“Trade deals are always challenging, a good trade is the one where both sides benefit and it is a win-win situation for both the countries.”
Ciobo stressed that the countries are working on a good quality trade deals which will look forward to benefiting all the stakeholders. However, he also clarified that no dates have been finalized for the next round of negotiations for Comprehensive Economic Partnership Agreement (CECA), which started in 2011.
India is Australia’s fifth-largest export market, with Australian merchandise and services exports valued at approximately A$13.5 billion in 2015. On being asked what India should export to be indispensable for the Australian economy Ciobo said.
“There are a lot of areas where India has a competitive advantage, we see particularly around technology. It not about what one country exports and what the other country imports. I would say that is the wrong way to measure the components of a good trade deal.”
Talking about the $16.5 billion Adani Carmichael coal project, the minister said “It is certainly moving forward, there have been aspects of the investment that have taken longer than expected, but there is a process to be followed. To Adani’s complete credit they have stayed the course and completed the process and I think India, Adani Company and Australia will all be beneficiaries of this project.”
Adani group will resume its Carmichael coal project in Australia in October and is expected to ship the first consignment in March 2020.  The company has clarified after the controversy-hit project cleared two major legal hurdles.
India and Australia have such broad people to people links that I am confident that we can strengthen our trade and economic ties. , Ciobo concluded.