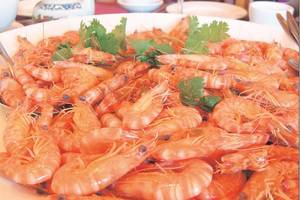 India claimed the top spot in shrimp exports to the global market in 2016 with an unprecedented 14.5% growth over the previous year, according to a trade report by FAO’s Globefish, which is responsible for information and analysis on international fish trade and markets.

The report says that India also achieved the distinction of 130% growth in the exports of value-added shrimp, growing from 10,100 tonne in 2015 to 23,400 tonne in 2016, mostly directed to the US market. India is the second-largest fish producer in the world after China and accounts for nearly 6% of global fish production.

India’s top export markets include the US, Vietnam, the EU and Japan. Indian seafood exports to the US is seen recouping its losses suffered due to the punitive tariff imposed by US department of commerce (USDOC) in 2004 with the help of higher production of vannamei shrimp, which is cheaper than the traditional black tiger.

Seafood exports to the European Union and South Africa have also come under intense scrutiny in the recent past. The EU commission has passed a motion to increase the number of shipments of Indian aquaculture products stopped for checks at the borders to 50% from 10 % earlier. On the global demand for shrimp, the reports says that US, EU and Japanese markets showed a moderate growth.
Strong demand was reported from China due to decline in domestic production. International prices remained stable throughout 2016. “Mixed production trends for farmed shrimp were observed in Asian producing countries during 2016, with a total estimated production of around 2.5 million tonne. While disease remained a major concern, adverse weather conditions also had impacts on production, particularly during the first half of the year. Fortunately, supplies recovered in India, Indonesia, Vietnam and Thailand during the second half of 2016,” the report said.
International prices for shrimp remained stable throughout 2016. “In terms of prices, vannamei shrimp prices increased marginally during 2016. In the single-largest import market, the US, there was a 5.5% rise in import prices compared with 2015. US prices for Indian shrimp and Ecuadorean shrimp increased 2.7% and 7.8% respectively,” the report said. Year-on-year imports increased significantly in Vietnam, China, the Republic of Korea and Hong Kong.