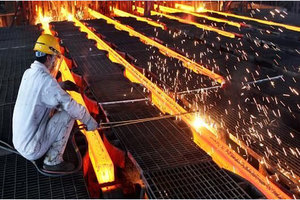 Domestic steel prices staged a smart rebound, in line with international trend, despite a moderate demand growth of 4.4 per cent in the first four months of the current fiscal, says a report.

"International steel prices have staged a sharp recovery since June 2017, driven by the Chinese governments supply- side reforms to reduce domestic steel overcapacity, a steadily declining trend in Chinese steel exports...," Icra said said in a report.
Global steel capacity utilisation levels also inched-up from 68 per cent in December 2016 to 73 per cent in June 2017, the rating agency said.
"Apart from structural factors like closure of excess capacity, we believe that up-fronting of production and purchases ahead of a planned winter shutdown in China is also a factor leading to the buoyancy in steel production and prices witnessed since June 2017," Jayanta Roy, Senior Vice- President and Group Head - Corporate Sector Ratings, Icra said.
Therefore, continuity of this price momentum hinges upon the sustainability of demand from the steel intensive real- estate and infrastructure sectors in China, he said.
The agency said, "Domestic steel prices too have taken a cue from the buoyancy in international prices despite a moderate domestic steel demand growth of 4.4 per cent in the first four months of the current fiscal".
Between July and August of FY18, domestic HRC prices have increased by around 10 per cent, reaching Rs 39,250/MT in the fourth week of August from Rs 35,750/MT in the first week of July. Moreover, supported by favourable international steel prices, domestic mills continued to push exports, as reflected by a 66 per cent growth in Indian steel exports between April and July of FY18, it said.
Further, the rising export volume has enabled domestic steel mills to register a healthy annualised production growth of 7 per cent and a capacity utilisation of around 81 per cent during the period from April to July of FY18, according to the report.
However, given that steel mills stand to benefit from buoyant steel prices in both the domestic and international markets in Q2 FY18, Roy said gross contribution levels of steel players are likely to improve sequentially in the current quarter.