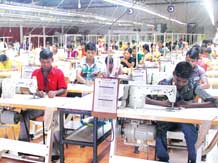 The textile sector could witness a jump in its export numbers this financial year due to the falling rupee as there is a spark of revival witnessed in the first quarter of this financial year. Textile exporters feel that the depreciating rupee could lead to a 5-10% rise in textile exports this fiscal after a bleak year in 2012-13.

"There should be 5-10% increase in overall textile export as a result of falling rupee and also, because we are becoming more competitive in this sector. Hence, there would be a turnaround after a gap of few years in the textile industry", said  Amit Goyal, President, Confederation of Indian Apparel Exporters (CIAE).

The impact of the falling rupee, which had depreciated around 5% in first quarter of this fiscal year over the same period in 2012-13, has already reached the ready-made garments segment where exports rose by 11.7% to $3076 million in April-June period from $3437 million in corresponding period of 2012-13. This, economists say, is a healthy sign for revival in textile exports.

"Rupee depreciation will bound to help the overall textiles sector because our finished product is garment and if we are doing well in that, other segments would also do well. Ready-made garments will drive the growth in other segments of textiles and hence, overall textiles export would be better this year", said Ajay Kumar, economist, Confederation of Indian Textile Industry (CITI).

However, the exporters felt that not only rupee, but several other factors also contributed to a surge in textile exports. "It is true that the rupee depreciation has contributed to the export rise but that is only partial as around 40-50% of the impact had reached the exporters. The rest is due to a rise in demand for textiles outside as there is a revival in the US market which is a good sign", said Goyal

He also added that the market is shifting to India from China due to higher cost of production there. "In China, there is a rise in labor cost, hence, there is shift in some of orders from China which is another factor", said Goyal.

However, segments such as cotton textiles, man-made wool and woolen, silk, etc did not perform well in terms of export. Cotton textiles export declined by 10.4% to $2326 million in first quarter of this year against $2596 in same period last year. In this period, wool exports declined by 7.5% to $2326 million from $2596 million and that of silk plunged 8.6% to $95 million from $104 million.

Experts believed that these segments would not produce good results this year too. "Silk, wool we are going to suffer this time also. These segments are not doing pretty well as we are not inherently better in terms of wool and silk, hence, we do not expect much from this segment", said Kumar.

However, there is a surge in demands for carpets in international market as the exports for carpets (except silk) rose 12% to $254 million from $226 million, and that of silk carpets rose magnificently to $11.8 from $1.4 million.

Almost half the countries to which India exports textiles saw a decline in numbers in Jan-April period of 2013. For instance, the textile exports to China declined by 27%. However, there was a pickup in exports to countries like US and Bangladesh where outbound shipments went up by 7.5% and 16% respectively.

"Our raw material is now going to Bangladesh and not China as China had last year procured a lot of cotton yarn from us. Nearly 48% of our cotton yarn was exported to China and hence, they might be utilizing the buffer stock", explained Kumar.

He further added that US contributes to 20% of our ready made garment and hence, a rising demand in the US markets could be a bumper ride for textiles this year.