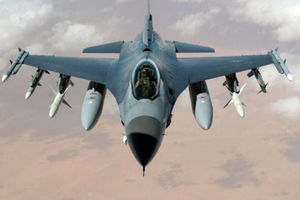 US Defence giant Lockheed Martin which is in talks to set up a plant in India, is closing in on an international deal for F-16 fighter planes and said that it might consider building all jets at this proposed Indian plant and then export them to various countries, a report claimed. A Reuters report stated that Lockheed is offering to make India the sole F-16 production centre, as they are shutting its F-16 production line at Forth Worth in Texas.

According to Reuters, Lockheed Martin and Sweden’s Saab are in a race to supply the Indian military with at least 100 single-engine jets produced locally under the Prime Minister’s ‘Make in India’ scheme. The government of India is reportedly set to issue a formal request to both the firms over the next few days to provide the plans to design, develop and produce combat jets in India.
The foreign aircraft maker will reportedly collaborate with an Indian firm to develop a world-class indigenous aeronautical base that India struggled to build for years. In this regard, Lockheed has decided to collaborate with Tata Advanced Systems to produce the F-16s. Saab on the other hand has not yet announced their local partner to produce the Gripen E aircraft.
Reuters quoted Randall L Howard, F-16 business development head, saying that following the shut down of the production line at Forth Worth, Texas, the new orders will be produced from a Greenville facility. “The opportunity for India is to then move all of that into India and that’s what’s being proposed,” he said.
Initially, concerns were raised regarding the plan to relocate the Greenville production line to India, which seemed directly contradictory to US President Donald Trump’s ‘America First’ campaign under which he pressed for companies to invest in the USA. However, the plan reportedly enjoyed the support of the US Government.
As per Howard, winning the contract with India will protect thousands of jobs at Lockheed in the US as well as among its component suppliers. They plan to begin with an assembly and slowly ‘phase it in’.