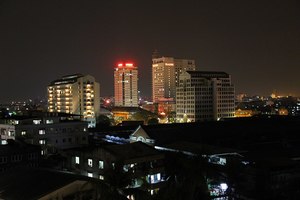 The Indian Embassy in Yangon has announced relaxation of restriction on beans and pulses import from Myanmar after negotiations between the embassy and Myanmar authorities in a bid to resolve the current trade crisis, official report said Thursday.

The relaxation is an attempt to address the concerns related to cases in which contracts had been entered into by making advance payment.
"In view of the special relationship between India and Myanmar, the government of India has now intimated a relaxation of the provisions of the foreign policy in order to provide for registration of such import contracts of Pigeon Pea for which advance payment had been made prior to Aug. 5," said a statement of the embassy.
India announced early this month a 200,000-ton import quota on pigeon peas and 300,000-ton quota on mung bean and green grams.
The surprise restriction of the import quota of three major pulses from the country was blamed for plunging Myanmar's pulses industry into chaos and adversely affecting the local pulses market.
Myanmar has been exporting peas to India for nearly three decades, while India exported medicines, sugar and agricultural machinery to Myanmar.
Of Myanmar's total export of various kinds of pulses to India in 2016 amounting to 1 million tons, export of the three kinds of peas hit 900,000 tons worth 1.4 billion kyats (1.02 million U.S. dollars) in export earning.
Pointing out the imbalance in trade between the two countries, Myanmar merchants said the unexpected restriction of Myanmar pea export amount will cause unnecessary change of prices.
Yangon's commodity depot has ceased operation due to India's import quota restriction on pulses, prompting the pulse prices to plummet.
Myanmar exports around 1.5 million tons of pulses to foreign countries annually, of which India stands as Myanmar's largest pulses export market.