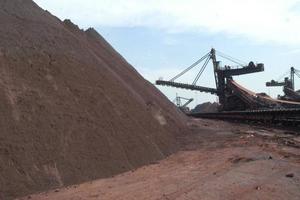 Stockpiles of iron ore in the country have swollen due to the imposition of 30 per cent export duty, according to the Federation of Indian Mineral Industries (FIMI).

In a press statement the industry body said, “There are huge stockpiles of iron ore to the tune of 149 million tonnes lying in the mines, mostly in Odisha and Jharkhand, as on March 31, 2017…Owing to imposition of export duty and sequential increase, the export of iron ore has been adversely affected.”
Iron ore exports had recovered marginally to 30 million tonnes in financial year 2016-2017. The recovery followed a drop in exports to 4.5 million tonnes in the financial year 2015-2016 from a peak of 117 million tonne in financial year 2009-2010. The recovery was due to exports by public sector undertaking Metals and Minerals Trading Corporation of India (MMTC), which is subject to a concessional export duty of 10 per cent.
R K Sharma, Secretary-General at FIMI, said domestic explorers are facing a double whammy as both exports and domestic consumption have slowed down. He said, “There is no demand for ore of less than 62 per cent (percentage of iron in the ore) in the country. Since there is no demand, the other course is export, which is viable only when duty is not imposed. Somehow the government is not convinced that export duty should be removed. So stockpiles will go on rising.”
"If export duty is not removed, the extracted stock pile in the country will not be lifted. There may be a time when I will not want to produce more iron ore," he added.