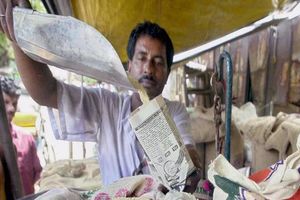 According to data from the Agricultural and Processed Food Products Export Development Authority, India exported basmati rice worth $1.26 billion (Rs 8,168 crore) in the June 2017 quarter, while buffalo meat exports were $849 million (Rs 5,473 crore). Around 1.3 million tonnes of basmati rice was exported in the April-June quarter, up from 1.18 million in the corresponding months in 2016. Export of buffalo meat, however, declined to 2.79 lakh tonnes from the earlier 2.8 tonnes.
Buffalo meat had overtaken basmati rice because Iran, which uses almost a quarter of India’s export, had stopped new orders. This year, however, Iran imported basmati rice even during its harvest season. The Centre’s ban on the sale of cattle for slaughter also affected imports and exports, Business Standard reported on Tuesday.
Exporters of buffalo meat said that the growth of the market depends a lot on the government’s policies and their consistency.