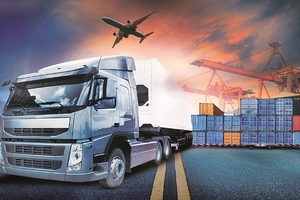 Taking forward a long standing goal of the government, the latest economic survey has again harped on the need for India to achieve a respectable share of 5 per cent of global exports but exporters are not too sure how the country will get there.

Currently, the figure is 1.7 per cent in 2016, which the government has accepted is very low for an economy the size of India. Exporting powerhouse China supplies China’s commands 13.2 per cent of the global supplies, on the other hand.
To do so within the next 5 years, as the Survey wants, the country's outbound trade would need to have a compounded annual growth rate (CAGR) of around 26.5 per cent for at least 5 years (2017-2021) assuming that global growth continues at the CAGR of 1.5 per cent (2010-15), the Survey says.
However, this might be easier said than done. “Since 2012 to 2015, the compounded annual growth rate for goods exports have not gone beyond 2 per cent. To bring it up to such a high figure won't be possible even after including both goods and services exports while world trade would need to grow at 5 per cent annually." Federation of Indian Exports Organizations Director General Ajay Sahai said.
While government officials suggested that the current CAGR for both goods and services exports together is beyond 15 per cent, the lack of a consolidated data makes the calculation difficult. "Also, it doesn't help that services exports are overwhelmingly concentrated in the Information Technology which has suffered severe blows to its global contracts owing to a wave of anti-globalization over the last 2 years." an official said.
For solely merchandise exports, reaching a compound growth of a maximum of 15 per cent annually may just be possible under optimum circumstances. This takes into account the latest global trade growth forecasts still slow at 2.4 per cent, factors in the incremental benefits of the Goods and Services Tax regime and the constant strengthening of the Indian Rupee, Sahai added.
The argument of upgrading India's share of world exports had been made earlier this year in a report on the sector by HAC Prasad, a senior economic advisor at the finance ministry. The issue has also made its mark on the currently ongoing mid-term review of the Foreign Trade Policy 2015-20 (FTP).
However, the roll out of the FTP has been postponed twice with September end now expected to be the deadline. Senior government officials suggested one of the key areas of debate has been whether to bring down the $900 billion merchandise export target by 2020 since the industry has informed that not more than $700-750 billion can be reached.
Suggested Quickfix
To rapidly grow the export sector, the Economic Survey has suggested the need for taking swift steps, the most significant, of which is the streamlining of the various export promotion schemes currently running while aiming towards phasing out some of them, the Economic Survey has suggested. “Many duties have been subsumed under GST and if tariffs are reduced to realized or near realized levels, some export promotion schemes can be phased out.” the Survey pointed out.
Also, the survey noted that rationalizing tariffs is needed. It points out that realized tariffs or basic customs duty is currently very low at 2.8 per cent in 2015-16 and constitutes less than one fourth of the average applied tariffs due to various exemptions.
On the other hand, the topic of reclaiming low skill manufacturing in leather and apparel — an area in which the government feels India has a good chance of taking advantage of China’s higher wage costs — has again been broached.
Matching Demand to Supply
However, analysing India’s exports, the Federation of Indian Export Organizations (FIEO) has pointed out that more than 50 per cent of India’s exports — across the top 200 product lines — is part of 58 per cent of global imports of the same products.
Therefore, at an aggregate level, exports from India square with global trends in imports, FIEO has said, adding that, this represents a long-term trend. However, India’s global export share across these lines is only 1.43 per cent. An increase of share by even 0.50 per cent would add to over $80 billion to exports, Ganesh Kumar Gupta, president, FIEO said.
“We have requested the government to provide additional support to these 200 product lines," Gupta added. The product lines include items such as milled rice, unprocessed diamonds, animal meat, apparel, footwear, automobiles, and iron products.
Plethora of problems
Exporters point out further forecast challenges for exporters, expecting continued appreciation of the rupee in the near future. Since the currencies of competing nations like Bangladesh, Philippines and Vietnam have depreciated, India’s exports will continue to lose competitiveness in the global market, exporters warned.
The introduction of GST and the ensuing confusion over the operation of export promotion schemes has led to exports slowing down is further dragging down the prospects of the sector. “In fact, several schemes for giving a boost to exporters by the commerce ministry have been turned upside down and their functioning has become extremely difficult or not viable,” T.S. Bhasin, Chairman of Engineering Exports Promotion Council said.