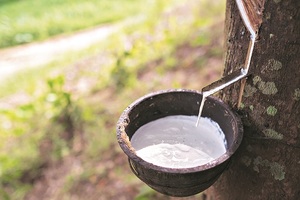 Triggered by a sharp increase in demand from the United States and the European Union, India's exports of rubber articles are likely to jump by over 10 per cent in the current financial year.

Over 6000 units involved in the business of manufacturing around 35,000 highly engineered rubber products for applications in railways, defence, submarine, highways and other such sectors. Of this around 100 large units and 3000 medium size have invested in modernizing their age-old plants to cater to demand from the United States and the European Union. These companies have tied up with global giants, including 3M, Dupont, Sabic who have set up their research centres in India, to bring modern technology in synthetic rubber to improve efficiency.
The remaining around half of the small scale units, however, continued to focus on domestic plants by complimenting with large units for survival in the absence of investment capabilities. These small scale units continued to face challenges in scaling up their manufacturing capacity to meet the requirement of customers.
"While our raw material—natural and synthetic rubber—supply is controlled by a few large corporate houses, we face stiff competition with Chinese manufacturers in consumer markets including the United States and the European Union for which we need a favourable government policy. Firstly, the industry needs a dedicated export promotion council something like Rubber Export Promotion Council (Rubexil) to take up our issues with the government. Currently, our issues are taken up to the government by individual companies which left un-addressed. Secondly, our attempt should be to address trade barriers like high-interest rate on working capital, long term policy on raw material availability etc. in addition to other such issues. We see our exports growing in double digits irrespective of the growth in the economy," said Vikram Makar, senior vice president of All India Rubber Industries Association (AIRIA) and chairman and managing director of Oriental Rubber Industries, one of India's largest producers and exporters of rubber articles.
Directorate General of Commercial Intelligence and Statistics (DGCIS) under the Ministry of Commerce and Industry, showed India's exports of rubber articles (excluding non-tyre and natural rubber) at Rs 2,280 crore for the financial year 2016-17 as compared to Rs 2,008 crore for the previous financial year.
"China has commoditised exports of rubber products resulting into huge volume of shipment going into the consumer markets. But, we have specialised our products which fetched better realization in addition to product specific demand in the United States and the European Union. That's the reason, our exports to these two destinations continued to move up despite turbulence in economies of these regions," said Vishnu Bhimrajka, Director, Polmann India Limited.
Meanwhile, the United States and the European Union together contribute nearly 70 per cent of India's overall rubber products' exports. Indian exporters, however, are looking to raise India's share in the world market to 5 per cent in the next couple of years from the existing 1.48 per cent compared to China's market share of 11 per cent.
The industry is facing huge shortage of skilled workforce which the association is working on to address through commencement of certification programmes in technical institutes, Sundeep Gokhale, deputy secretary general, AIRIA said.
"Out of 700,000 skilled workforce is required to meet growing needs of India's rubber industry, we have just 500,000 manpower strength. We are in the process to tie up with technical universities to general more skilled workforce in this highly technical rubber industry to meet out future requirement," said Vinod Patkotwar, chief executive officer, Crown Rubber Products, a Pune-based rubber article manufacturer.