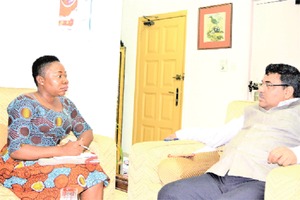 The fair, which will host an exhibition on various industries, including technology, will also feature a business-to-business (B2B) conference to enable Indian businesses to network with government institutions in the participating countries.

Officials of the FICCI will also use the fair to position Brand India as a leading economic player in West Africa, facilitate Indian investments into the region and create awareness of the best technologies and products that India has to offer.
The over 70 companies that will participate in the event will thus interact in the areas of agriculture and food processing, automobile, health care and pharmaceuticals, education, energy, infrastructure and construction, clothing and textiles.
Benin, Burkina Faso, Cameroon, Cote d’Ivoire, Gabon, Liberia, Nigeria, Senegal, Sierra Leone and Togo are expected to participate in the fair.
Indian High Commissioner
The Indian High Commissioner in Accra, Mr Birender Singh, made this known in an interview in Accra.
He said the decision to host the trade show in Accra showed the importance his country attached to its bilateral relations with Ghana and the rest of West Africa.
The Namaskar Trade Show, he said, would also consolidate 60 years of the establishment of friendly diplomatic relations between Ghana and India.
Presently, trade balance between Ghana and India was in favour of Ghana, as Ghana took advantage of certain key investment policies to expand its exports to India, he said.
“We expect the fair to strengthen people-to-people relationships, bonds between the two countries and business relationships that are capable of generating employment for Ghanaians,” Mr Singh added.
Priority engagement
The High Commissioner noted that trade between India and West Africa had become a platform for job creation.
India, he said, was the first country to offer a duty free tariff preference scheme to African goods and exportable commodities in 2008.
Under the scheme, he said, more than 98 per cent of tariff lines were opened to exports from Africa at low tariff, which provided a huge access to India’s domestic market.
“We have been encouraging the 34 least developed countries in Africa to make better use of the duty free scheme to consolidate developmental gains in their countries,” the High Commissioner stressed.
On Ghana, he said whereas Indian exports to Ghana were to the tune of $682 million as of 2016, Ghana’s exports to India were to the tune of $1.93 billion.
Mr Singh said India was the second largest foreign investor in Ghana in terms of the number of projects, covering educational institutions, telecommunications, pharmaceuticals, agro processing, among others.
Asked about the possibility of Ghanaian businesses operating in India, considering the growing number of Indian businesses in Ghana, Mr Singh said his country would be happy to receive investments from Ghanaians, since India had a liberal investment policy that allowed profit repatriation.