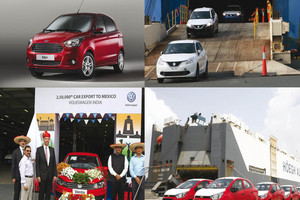 As it did for the first two months of FY2018, Ford India remains the leading exporter with shipments of 66,628 units (+57.18%) as a result of growing demand from overseas markets for the made-in-Chennai new Figo, which is sold as the Ka+ in the UK and Europe. Exports of the new Indian-made Figo first began in July 2016.

At No. 2 is Hyundai Motor India with 45,466 units albeit with negative growth for the first fourth months of FY2018 (-16.40%). The company’s export portfolio includes the Eon, Grand i10, Xcent, Elite i20, i20 Active hatchbacks and the Creta SUV. Of these the new Grand i10, Creta and Xcent see considerable export demand. Its key global markets are Latin America (Mexico, Chile, Peru, Panama), Africa & Middle East (South Africa, Algeria, Tunisia) and Asia Pacific (Philippines, Nepal).
At third place is Maruti Suzuki India with shipments of 37,077 units, which marks flat YoY growth of 0.81 percent. The company has jumped two ranks in two months considering it was at fifth place in April-May 2017. With new manufacturing capacity coming on stream in the form of the Gujarat plant, Maruti is doing all it can to feed the surging demand for its vehicles – particularly the Baleno and Vitara Brezza – in the domestic market. While it will continue to feed domestic dealers inventory for the upcoming festive season, expect the carmaker to step up exports in Q4 of FY2018.
At No. 4 on the top exporters’ list is Volkswagen India with 35,704 units (+21.19%). The German carmaker is bullish on its made-in-India export strategy and has been shipping cars from its Pune plant to over 35 countries to Asia, Africa, North America and South America. Mexico continues to be its biggest export market, contributing over 80 percent of its overseas volumes. The range of cars being exported includes left-hand drive as well as right-hand drive Polo and Vento cars.
On July 28, Volkswagen India announced shipment of its 250,000th car to Mexico; the India-made Vento has become the third highest selling passenger car in Mexico. The export volumes to Mexico contribute to more than half of the total production at the Volkswagen plant in Pune.
At No. 4 is GM India, which in May 2017, announced plans to exit domestic market operations by the end of the year and focus solely on exports to justify its manufacturing operations at the Talegaon plant. Between April-July 2017, the company exported 29,210 units (+72.57%) with the left-hand-drive Chevrolet Beat, which is sold as the Spark in many countries globally, being despatched to Mexico, Chile, Peru, Central American and Caribbean countries, Uruguay and Argentina. On June 26 this year, the company began exports of the Chevrolet Beat sedan to Latin America. The Beat Essentia is a compact sedan first showcased at the 2016 Auto Expo and based on the new Beat.
GM India, which until end-June, was producing only the left-hand-drive Chevrolet Beat hatchback at its Talegaon, Pune plant, exports to many markets including Mexico, Chile, Peru, Central American and Caribbean countries, Uruguay and Argentina.
Nissan Motor India, whose exports have slowed down considerably due to the new Micra being made at partner Renault’s Flins plant in France, is at No. 6 in the export list with 18,850 (-33.58%). Around 132,000 Nissan Micras will be rolling off the production lines at the Renault Flins facility this year.
At No. 7 is Toyota Kirloskar Motor, which has despatched 5,973 cars (+27.87%) to overseas markets, followed by Renault India with exports of 4,171 units (+243% on a low base), Honda Cars India with 1,736 units (+11.57%) and Mahindra & Mahindra with 1,719 units (-54.51%)
PV exports are also helping sustain the India drive global automakers like Ford, Nissan, Volkswagen and GM, all of whom have more export numbers to their credit than their domestic sales. Importantly, their export operations help keep their plants, which have extensive manufacturing capacity, humming. What’s helping automakers in India is the abundance of a skilled labour force, low cost of manufacturing compared to global markets and upskilling of the supply chain that can now meet international quality standards. Also, as India enters into more Free Trade Agreements with global powers, additional new markets are set to be opened up that will offer a vista of new opportunities for the passenger vehicle industry.