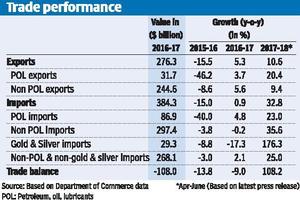 Exports need to grow at 26.5 per cent annually for the next five years for India to reach a “respectable’’ 5 per cent share in world trade from the existing 1.7 per cent it has been stuck at since 2011, according to the second part of the Economic Survey for 2016-17.

This could be achieved only through reforms in trade policy by diversifying exports, rationalising tariffs and developing world class export infrastructure, it added.
Making a case for lowering average applied tariffs, the Survey stated that there is scope for reduction by selectively bringing down tariffs across many lines, while retaining higher tariffs for sensitive and important items.
On a bold note, it further proposed that bound tariffs (ceilings) committed to at the World Trade Organisation could be reduced which can help India to take a more pro-active role in multilateral and bilateral negotiations.
India’s negotiating team at the WTO, at present, is focussed on getting a fair deal in the area of agriculture subsidies and protecting sensitive items against import surges and has not shown any interest in negotiating tariff reduction.
Trade policy
Highlighting the importance of the forthcoming review of the country’s Foreign Trade Policy next month, the Survey said that the review exercise is particularly important in the light of recent international developments and special efforts are needed to not only review but accelerate India’s exports.
India’s exports grew 4.7 per cent in 2016-17 after two years of continuous decline.
In a suggestion that the exporters might not treat with enthusiasm, the Survey proposed that some export promotion schemes could be phased out if tariffs are reduced to realised or near realised levels, while others could be streamlined as many duties have been subsumed under GST.
The duty drawback rates (refunds given to exports in lieu of input duties paid) can also be revised downwards and the revenue saved could be used for export marketing efforts.
To increase exports, the Survey made a case for a demand based export basket diversification rather than a mere supply based strategy. It also stressed that world class export infrastructure and logistics, especially port-related, need to be developed on a war-footing.
For greater States’ participation in exports, devolution of funds to States need to be linked with their export effort, it suggested.
Green shoots
On a positive note, the Survey said that some green shoots have started to appear on the trade horizon with world trade growth projected at 3.8 per cent and 3.9 per cent in 2017 and 2018, India’s exports continuing to be in positive territory for the fourth consecutive month in May and in double digits in April-May 2017. All external sector indicators like reserves cover for imports, external debt to GDP ratio, foreign exchange reserve cover for external debt and debt servicing ratio, too, are in the comfort zone.
It, however, cautioned that rising trade deficits on the domestic front and rising protectionist tendencies on the global front are things to watch in the short term.
On currency fluctuation, the Survey pointed out that while the rupee has been one of the most stable currencies among EMEs, the appreciation of the real effective exchange rate (REER) indicates that India’s exports have become slightly less competitive.
Lauding the government’s move to bring FDI in most sectors under automatic approval route, except a small negative list, the Survey said that it resulted in FDI equity inflow of $43.4 billion in 2016-17, which is not only an increase of 8 per cent over the previous year, but also the highest ever equity inflow.