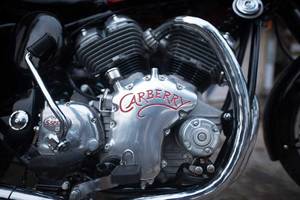 If you are wondering how to give your Royal Enfield a boost of power, then Carberry Motorcycles has just the thing for you. Originated in Australia and now based in Bhilai, the custom motorcycle manufacturer recently launched a 1000cc V-twin engine made by combining two 500cc Royal Enfield Unit Construction Engine (UCE) blocks.

Priced at Rs 4.96 lakh (ex-factory), the India-made engine units are available for export, or for existing homologated Carberry motorcycles or for display purposes only. For this price, buyers will get a primary drive and gearbox. Exhaust set is not included in the package though. Those interested in buying the engine will have to pay half the price as a deposit.
The handmade 1000cc carburetted V-twin engine units are capable of producing approximately 52.2hp of power and 82Nm of torque. This engine will be coupled with a 5-speed gearbox and 7-plate clutch and a strengthened primary chain.
The engine will have an oil capacity of 3.7 litres which will be filtered through an external spin on oil filter. The rate of pumping oil into this V-twin engine will be 10 times the capacity seen on a single cylinder Royal Enfield engine, the official Facebook page of Carberry Motorcycles claimed.
The engine will come with a heavy duty starter motor, sprag clutch design capable of withstanding load even from a 2-litre engine, and magnetic slumps, the company claimed. Hydraulic lifters and oil pumps will run in their own housings to protect the engine casings from wear and tear.
The engine will have linear power delivery with minimal vibration despite the powerful configuration, owing to extensive research and development, assured Carberry.
Those looking for something more than an engine unit will have to wait for some time as Carberry has promised motorcycles to accommodate these engines later this year. The company drew attention to itself after launching Carberry Enfield, a custom motorcycle running 1000cc V-twin engine made from older 500cc cast-iron Royal Enfield engine blocks. The motorcycle featured a strengthened chassis, to bear the increased torque and power, and components from Royal Enfield vehicles, to keep costs low.
Carberry Motorcycles was founded by Paul Carberry in Australia. He later moved to Bhilai in Chhattisgarh after 2011 upon entering a partnership with Jaspreet Singh Bhatia due to rising costs in Australia. They now plan to move to Pune sometime soon.