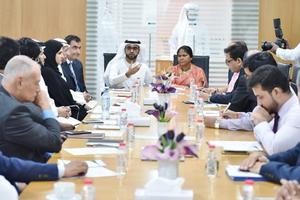 Dubai Exports, the export promotion agency of Dubai Economy, recently received a delegation from India led by Sadhvi Niranjan Jyoti, Honourable Minister of State for Food Processing, who was in the UAE as part of the preparations for the ‘World Food India 2017,’ India’s largest event for the food processing and allied sectors, to be held 3-5 November this year in New Delhi.

The two sides discussed ways to co-operate in the foods sector and promote participation of UAE food companies in World Food India 2017. It was also decided to organise a meeting between representatives of exporting companies from the food industry, including the food processing industry, in the two countries in line with the strategic objective of Dubai Exports to support local industries in leveraging trade and export opportunities and expand into markets overseas.
Government-level initiatives being implemented on both side to enhance bilateral economic relations and support companies in India, especially exporters, were reviewed during the discussions with the delegation. A notable initiative in this regard is the Global Buyer Protection Programme, launched by Dubai Exports in co-operation with the Commercial Compliance & Consumer Protection (CCCP) sector in Dubai Economy to protect the interests of traders who import products from Dubai, particularly during commercial disputes and in tackling obstacles. The programme was launched by the overseas trade office of Dubai Exports in India and will be expanded worldwide in the next phase.
Ali Ibrahim, Deputy Director General of Dubai Economy along with Mohammed Ali Rashed Lootah, CEO of CCCP, and Mohammed Ali Al Kamali, Deputy CEO of Dubai Exports welcomed the delegation, which included a number of government officials and representatives from the ‘Mega Food Park’ initiative of the Ministry of Food Processing, ‘Invest India’ (the foreign investment promotion arm of the Government of India) and various chambers of commerce.
"India is among the most strategic markets for Dubai and the UAE in general. The Organization for Economic Co-operation and Development (OECD) estimates economic growth in India to remain at 6.7 per cent over the 2015-2019 period. It’s a vast consumer market comprising states and territories with a diversity of tastes. Consumer spending in India is expected to reach AED 13.2 trillion in 2020, according to a report published by the Boston Consulting Group (BCG) in cooperation with the Federation of Indian Industry (FII),” commented Ibrahim.
"GCC exports to India have increased by 49 per cent annually over the past decade, the highest growth among the region’s major trading partners. Imports from India have increased by 39 per cent while India accounts for 16 per cent of the total GCC exports. The Boston Consulting Group estimates that India may become the world's seventh largest in private wealth, which is predicted to grow 150% from AED 7.3 trillion (US$ 2 trillion) in 2013 to AED 18.4 trillion by 2018. Such economic dynamism and diversity of tastes make food a promising segment of the Indian market,” added Ibrahim.
Al Kamali said the representative office of Dubai Exports in India plays a significant role in the diversification of exports from Dubai to India, as well as in improving awareness about UAE products and services in the Indian market. “The Global Buyer Protection Programme will open up new horizons, and will continue to boost exports out of Dubai not only in India but in its neighbouring markets too.  The visit of the Indian delegation will enhance confidence among traders overseas who want to import products and services from the UAE, particularly Dubai.”
Al Kamali added that there have been significant developments in the food and agriculture sectors in India in recent years, which in turn has enhanced opportunities for companies in the UAE and India. According to the government-established India Brand Equity Foundation (IBEF), abundant resources and increasing domestic demand enable the Indian food sector to enter into new partnerships. Given the robust bilateral relations existing, UAE exporters can benefit from this new trend, said Al Kamali.
Al Kamali also stated that Dubai Exports will support the World Food India 2017 through an integrated pavilion for companies and exporters from the UAE. Industry stakeholders are promoting food processing units and various incentives including low-interest loans are expected, leading to a highly efficient industry infrastructure and export opportunities.
One of the world's fastest growing economies and largest food manufacturers, especially in agriculture and dairy, India has a food market that is expected to reach around AED 3.4 trillion (US$ 915 billion) by 2020, serving a total of 1.3 billion consumers. In addition to achieving a retail trade of over AED 1.4 trillion (US$ 390 billion) India exported over AED 110 billion (US$ 30 billion) worth of processed food last year, making it one of the world's leading producers and manufacturers of food.
The launch of the Global Buyer Protection programme in India followed a joint statement issued in 2016 by His Highness Sheikh Mohammed bin Zayed Al Nahyan, Crown Prince of Abu Dhabi and Deputy Supreme Commander of the UAE Armed Forces, along with Narendra Modi, Prime Minister of India to develop a medium and long-term strategy for a 60% increase in UAE-India trade in the next five years.
The Global Buyer Protection Programme marks a quantum leap in enhancing business competitiveness and added value to everyone who imports from Dubai. It will also lead to improved confidence in Dubai's economic and business model and encourage buyers to source products from Dubai.