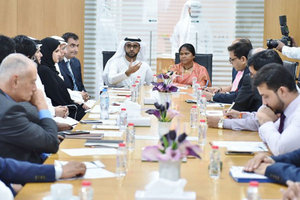 A delegation from India recently visited Dubai Exports, the export promotion agency of Dubai Economy, to build cooperation and as part of its preparations for the World Food India 2017 event.

The delegation was led by Sadhvi Niranjan Jyoti, Minister of State for Food Processing, reported WAM, the Emirates official news agency.
Ali Ibrahim, deputy director general of Dubai Economy, along with Mohammed Ali Rashed Lootah, CEO of Commercial Compliance and Consumer Protection (CCCP), and Mohammed Ali Al Kamali, deputy CEO of Dubai Exports, welcomed the delegation, which included a number of government officials and representatives from the ‘Mega Food Park’ initiative of the Ministry of Food Processing, ‘Invest India’, the foreign investment promotion arm of the Government of India, and various chambers of commerce, added the report.
The World Food India 2017 is India’s largest show for the food processing and allied sectors, and will be held from November 3 to 5 in New Delhi.
The two sides discussed ways to co-operate in the food sector and promote participation of UAE food companies in World Food India 2017, it said.
It was also decided to organise a meeting between representatives of exporting companies from the food industry, including the food processing industry, in the two countries in line with the strategic objective of Dubai Exports to support local industries in leveraging trade and export opportunities and expand into markets overseas.
Government-level initiatives being implemented on both side to enhance bilateral economic relations and support companies in India, especially exporters, were reviewed during the discussions with the delegation.
One notable initiative is the Global Buyer Protection Programme, launched by Dubai Exports in co-operation with the Commercial Compliance and Consumer Protection sector in Dubai Economy to protect the interests of traders who import products from Dubai, particularly during commercial disputes and in tackling obstacles.
The programme was launched by the overseas trade office of Dubai Exports in India and will be expanded worldwide.