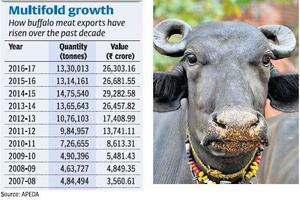 The controversy surrounding sale of cattle for slaughter notwithstanding, the Centre is taking steps to expand the export of buffalo meat to countries such as China and the US, where the commodity is banned due to the existence of foot and mouth disease (FMD) virus in some places in India.
The Department for Animal Husbandry, Dairy & Fisheries has identified FMD-free zones across the country where there is scientific proof of the virus being absent and has sent the list to global standards body OIE for recognition, a government official told BusinessLine.
“We hope that once the OIE recognises the FMD-free zones, India can start exporting from such zones to markets such as China, US and the EU, which do not import from the country as certain strains of the virus still exist here,” the official said.
Although OIE guidelines lay down that export of meat, if de-boned, de-glanded and frozen under certain conditions, is safe even from FMD-afflicted areas, certain trade partners are not comfortable with the idea.
In fact, even after extended negotiations for lifting the ban on buffalo meat from India, a team of quality inspectors from Beijing refused to greenlight exports at the last minute as the country is still not free of the virus.
“With an OIE certification, there should be no doubt in the buyer’s mind that exports are indeed taking place from zones that do not have the virus and are totally safe,” the official added.
India is tied with Brazil as the world’s top buffalo meat exporter, although exports remained almost static at $4.2 billion in 2016-17.
Despite the ban on sale of cattle for slaughter in animal markets, exports of buffalo meat grew 4.3 per cent to $849 million in the April-June 2017-18 period, compared to the same period last year.
Larger exporters unaffected
“The ban on cattle sale for slaughter mostly affected the small players and not the large exporters. Exporters have, therefore, not been hit,” the official explained.
The largest buyers of buffalo meat from India include Vietnam, Malaysia, Egypt, Saudi Arabia, Thailand, Iraq and the Philippines.
With the OIE certification, the Centre hopes to convince countries to lift the existing import bans and thus expand exports by another $2 billion.
“The demand from China alone would be more than $1 billion while the EU and the US also have great potential,” the official said.