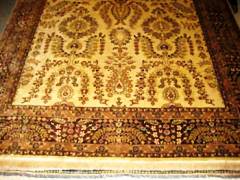 Indian carpet exporters can use the depot in Brazil, to be set up by the Government, for keeping their products for ease of export to European and other countries, Textiles Minister K Sambasiva Rao has said.

The Minister was in Uttar Pradesh’s carpet town of Bhadohi, where he interacted with carpet manufacturers and exporters at All India Carpet Manufacturers Association (AICMA) Hall.

Speaking to media persons, Mr. Rao said the Indian Government would be constructing a warehouse in Brazil at a cost of Rs. 1 billion, and exporters can use it to keep their products, meant for selling in new countries.

At present, most of India’s carpets are exported to the US, and the Brazil depot will help exporters in exploring the European market, the Minister added.

The Minister said he has suggested that weavers be associated with Mahatma Gandhi National Employment Generation Act (MNREGA), which assures at least 100 days of employment in a year.

The carpet industry in Bhadohi and Sant Ravidas Nagar district has been given G.I Registration as ‘Hand made carpet of Bhadohi’ for its unique and best workmanship.

India’s carpet industry is entirely export-oriented as over 95 percent of the production is exported.

The magnificence of Indian carpet weaving and the intricate patterns that have emerged from it have substantially increased India's carpet exports and placed it prominently in the international carpet map.