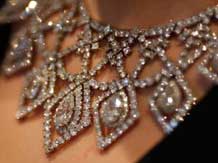 Strengthening of US dollar against Indian Rupee has helped exports of cut and polished diamonds from India. The exports in value terms has jumped by close to 44 per cent during April at Rs 9,965 crore against Rs 6,911 crore in the same month last year.

"There is a growth in exports with improvement in US economy. Also, increase in Dollar value against Rupee has helped realize better value for exports," said a diamond exporter from Surat.

However, industry maintained that strengthening of Dollar against Rupee would help exporters, while imports of rough diamonds will become costlier thereby reducing margins for diamond polishing units.

Indian Rupee fell by 4.9 per cent during the month of May to 56.55 per dollar today lowest in 11 months.

"With weakening of Indian rupee, imports of rough diamonds have turned costlier. This washes away profits for polishing units. Only exporters will gain from this currency situation," said Praveen Nanavati, a diamond expert.

"Since dollar value has increased, exports in value terms has grown sharply, while volume growth may not be that significant," he said.

Gems and Jewellery Export Promotion Council (GJEPC) data showed that exports of cut and polished diamonds during April stood at 2.54 million carats against 2.23 million in the corresponding month last year, showing a growth of 13 per cent.

However, industry players are eye rise in exports to continue with strengthening of overseas economies. Latest government data showed that India's gross domestic product (GDP) grew by 4.8 per cent in January-March 2013 quarter, while for the fiscal 2012-13 the GDP growth stood at 5 per cent.

"We need to boost exports to strike a balance against high imports. Economic growth has become a serious concern now. US and European markets are showing some signs of recovery. They constitute a big market for diamond industry so that is a big hope for us," said a member of Surat Diamond Association (SDA).