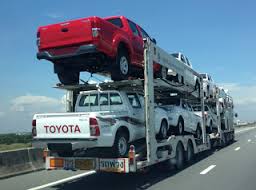 The Federation of Thai Industries (FTI) will this month review its full-year automotive export value target amid mounting pressure on car makers from the strong baht.

"The number of cars, 1.1 million vehicles to be exported this year, will remain unchanged, but export value in baht terms may need to be revised due to the continuing strength of the currency," said Surapong Paisitpatanapong, spokesman for the FTI's automotive industry club.

He said car makers have largely secured their international purchase orders through the end of this year, but the strong baht has put production costs on an upward track.

Thailand's automotive industry enjoyed a bumper year in 2012, with 2.45 million vehicles made, up by 68.3% from 2011 and lifting Thailand to 10th place among car producing countries. Domestic car sales totalled 1.43 million vehicles last year, up by 80.9%, while motorcycle sales rose by 6.11% to 2.13 million. Car exports increased by 39.6% to 1,026,671 units, a record high since Thailand began exporting cars in 1988 and making the country the world's seventh-largest car exporter. Export value totalled 490 billion baht, up by 42.7%.

The FTI forecasts 2.5 million vehicles will be produced this year, up by 2% from last year, with 1.4 million slated for domestic sales.

The FTI originally projected car exports to fetch the country 527 billion baht, but this was based on sales totalling US$17 billion at an exchange rate of 31 baht to the dollar.

For the entire automotive industry including parts shipments, exports were estimated at 887 billion baht, with parts alone accounting for 360 billion.

"Both cars and auto parts are expected to see export sales drop by 6% if the baht keeps hovering around 29 to the dollar this year," said Mr Surapong.