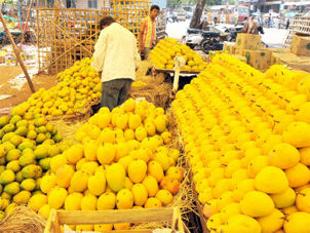 Mangoes exports from India to the US are likely to touch a record level of about 500 tonnes this year, due to a strong demand and an expected sufficient supply of export quality fruit, according to the government body APEDA.

However, inadequate irradiation centres for treating insect pest mango seed weevils and fruit fly from the fruits, is limiting large shipments from the country, it said.

Last year India, the world’s largest grower of the fruit, had shipped about 209 tonnes of mangoes to the United States.

“The overall mango exports to US are expected to reach a record 400-500 tonnes this year,” a senior official of the Agricultural and Processed Food Products Export Development Authority ( APEDA) said.

Since April first week, the country has exported 90 tonnes of mangoes, mainly from western India. ‘Alfonso’ and ‘Kesar’ varieties grown in the western parts of the country are being exported to the US, he said.

The supply of export quality mangoes is sufficient as of now. The arrival of mangoes from south India has started, while the season in Northern states like Uttar Pradesh will begin from mid-June onwards, the official added.

However, record exports will depend on supply of quality UP mangoes like ‘Dasheri’, ‘Langda’ and ‘Chounsa’ that will hit the market during monsoon,” APEDA said.

According to it, traders have managed to get good orders this time due to strong demand for Indian mangoes.

However, big volumes of exports to the US cannot take place due to insufficient irradiation centres in the country.

The US prefers irradiation to get rid of an insect pest mango seed weevils and fruit fly from the fruits.

At present, India has only one irradiation centre in Maharashtra with a processing capacity of 10-15 tonnes per day.

Mango exports to the US resumed in 2007. The fruit is being exported to the US via air after the irradiation process, which is a modern food preservation technology that can reduce the risk of food poisoning, control food spoilage and extend shelf-life of food.

Indian mangoes are being exported at Rs 150-175 per kg at fob (freight on board), almost the same price as last year.