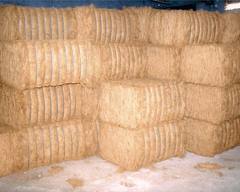 Exports of Coir and Coir products from India in 2012-13 registered an all-time high record of Rs 1,116 crore, an increase of Rs 64 crore from the previous year, Coir Board Chairman G Balachandran said here Wednesday.

During the previous year, the total exports of coir and coir products was Rs 1,052.6 crore.

There was a five per cent increase in quantity and six per cent increase in total value, it added.
While coir fibre, tufted mat, coir matting, coir geotextiles and coir pith registered a positive growth of two to 21 per cent; coir yearn, handloom mat, powerloom mat, coir rope, rubberise coir, curled coir, coir rugs and carpets and other items recorded a negative growth of 3 to 87 per cent.

Exports were made to 112 countries, out of which share of the US was 22.8 per cent in value and 13 per cent in quantity.

China continued to be the largest importer of coir fibre from India and contributed 19.4 per cent in value and 33.8 per cent in quantity.